Activists and organizers enjoy The Action Network because it’s easy to set up, free for small groups, and boasts all the critical tools for digital outreach. And as a toolkit built ground up using the Open Data Supporter Interface, it’s fast and efficient for developers to add new integrations that make Action Network more powerful.

In recent months, OSDI coalition members and affiliated developers have added tools for texting, digital lobbying of elected officials, and for WordPress.

“We want to be a hub for movement technologies,” said Jason Rosenbaum, CTO of Action Network. “New integrations from Mobile Commons and New/Mode, plus new options for WordPress users, mean that more organizations are using the OSDI to save time and money in their digital programs.” 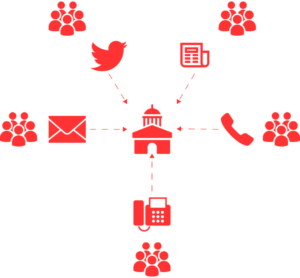 And, a new integration with New/Mode means that progressives can now call, tweet, or fax their elected officials, as well as write letters to the editor. The tools work in the US, Canada, the UK and EU, and Australia, and anyone who takes action in New/Mode can be subscribed to your Action Network list and marked as having taken the appropriate action.

“New/Mode is focused on helping progressive organizations access the most sophisticated digital campaign tools in the world at a cost they can afford,” said Steve Anderson, Founder and Chief Strategist at New/Mode. “We’re campaigners ourselves, and we noticed that many groups were recreating the wheel with their custom campaign tools. We knew that there was an opportunity to collaborate to enable the progressive movement to be more efficient and effective. We’re extremely excited to work with OSDI and ActionNetwork! We have a common goal to empower the progressive movement and we’re stronger together.”

Jonathan Kissam has released a plugin for Action Network partners to improve their WordPress options. The plugin includes a calendar of events shortcode and widget, as well as expanded signup options that don’t conflict with Action Network’s on-page JavaScript embeds. And OSDI’s Adriel Hampton has a new website product called “ActionSites” for Action Network users on free and paid plans.

“Every organization needs a website and basic digital organizing tools,” said Hampton, who runs a boutique marketing and strategy consultancy for progressives known as AHG. “It was a no brainer to put together Action Network with WordPress into a packaged product that’s simple for organizations to customize and update, and it’s been a combo that our clients really love.”

Finally, csv2osdi, a ruby-based open source tool has been released to provide easier and more flexible imports from CSV files into OSDI systems. It has a flexible configuration system to map to your CSV format into OSDI fields as well as customer specific custom fields. It allows mapping phone numbers into custom fields for systems like Action Network.  Another significant features is row-level tagging. You can set the tags to be applied to records on an individual level rather than on the entire import. Csv2osdi can be found on github.

OSDI began as an outgrowth  of the 2012 Washington United for Marriage campaign, after proponents experienced frustrations due to a lack of interoperability between the hodgepodge of tools needed to win progressive victories. After an initial conversation instigated by Josh Cohen, the director of technology for that campaign, and campaign vendors like Amicus, OSDI has grown considerably and is now led by volunteer technologists from across the U.S., in implementer roles at nonprofits as well as management positions at technology companies including NGP VAN. OSDI’s membership includes unions, advocacy organizations, nonprofits, political strategists and vendors. In addition to progressive vendors like Action Network, OSDI members and adopters also include general technology providers such as telephony provider CallHub and data append vendor Accurate Append. Integrations using the OSDI standard typically reduce technology integrations from weeks to days. http://opensupporter.org